Accused of Bearing False Witness? No, But the Process Needs Fixing

republican religious-freedom healthcare tennessee senate-bill-425 house-bill-1379 roe-v-wade
On Wednesday I was accused by a legislator I like, and who is generally conservative, of being “ungodly” because I “bore false witness” against that legislator’s vote in favor of House Bill 1379. I did not bear false witness; however, what happened shows why the committee process in the state House must be changed.

I wrote about this legislation in my commentary last week (it mandates insurance companies cover fertility treatments, even for unmarried couples) and won’t recount it here. But because I could not be at the committee hearing on Wednesday morning to observe the proceedings, I went to the state legislative webpage that afternoon to find out what happened.

I scrolled through the video of the meeting to see which members were present and watched the video of the voice vote at the end several times. The Chair ruled that the “ayes” prevailed. Because all you can see during the vote is the chair and you can’t distinguish the voices of those who are saying aye and no, I click on the “vote” tab to see how the vote was officially recorded. This is the screenshot. Notice there are three Republicans shown as voting “no,” and one was present and did not vote which, effectively served as a “no.”

Before going further let me explain how the process works so you will understand the problem.

How the House Committee System Works or, Rather, Doesn’t Work

In the House, committee votes are routinely made by voice vote, even when the question being voted on is for or against a bill. Often that process works, except when it is hard to “hear” which side was louder.

When the Chair is undecided, the Chair can have the roll called and the votes recorded individually. That wasn’t done.

When a Chair proceeds to call an unclear voice vote (and this one was audibly close), a member who disagrees with the Chair’s judgment on the ayes and nays can ask for roll call vote. If two others join in the request, then a roll call must be taken. That wasn’t done.

In addition to asking for a roll call, a member can challenge the ruling of the Chair. That wasn’t done either.

Finally, following a voice vote, a member can  ask the committee’s recording clerk to register and record their vote as being contrary to the way the Chair called the vote. That way the official record will show that the member’s vote was contrary to that of the majority.

Often the member will ask for this audibly. I listened for such a request after the Chair announced the outcome; nothing was said.

However, members sometimes go over to the Clerk after the vote and, off the video record, ask to be recorded on paper as voting contrary to the call of the Chair. However, the public cannot see that, and we have to rely on what the Clerk reports.

What the Clerk reports is what goes up on the legislature’s webpage. From the above screenshot, taken almost four hours after the committee adjourned, you can see four members were shown as having voted no.

I posted the above screenshot later in the day and, for the sake of those who didn’t know who was on the committee and present, I listed the names of those who I saw present and who were not shown by the Clerk as having voted no. That means they were yes votes.

When one of those persons I listed touted on Facebook having met a nationally known conservative later that day, I commented in an unambiguous manner that this conservative celebrity probably would not have agreed with a yes vote on that bill.

That, apparently, was my false witness. I reported the vote as called by the Chair and based on what the official record showed.

Here is the screenshot of the same webpage taken the next day, and notice that the results are different. Five members are now shown as voting no. 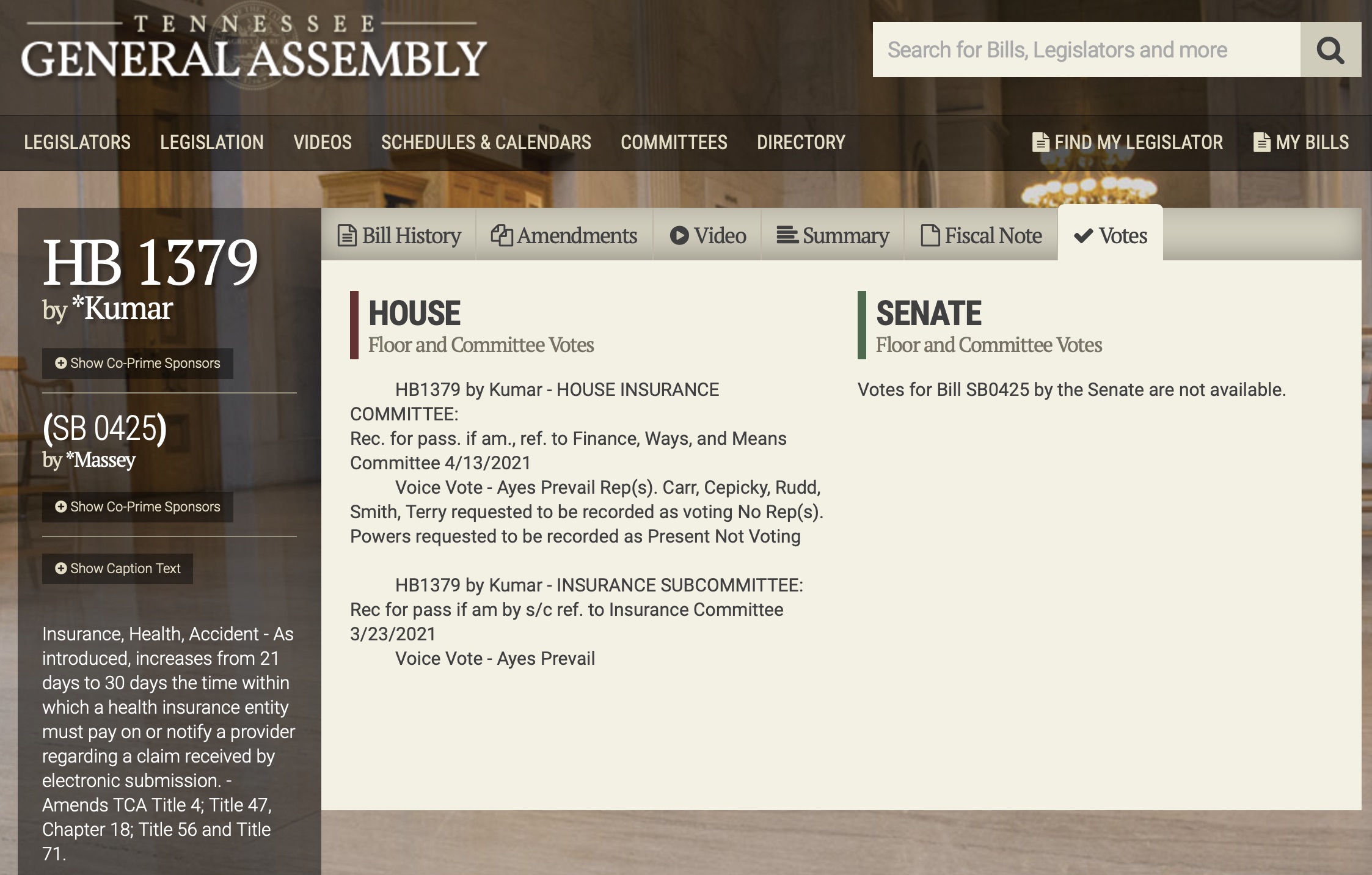 Good for those two members who are now shown as voting no, but here is the point: Every motion that would finally dispose of a bill needs to be done by recorded roll call. Period. And a little history shows that Republicans know this to be true.

What was Bad for the Democrat Goose is Now Good for the Republican Gander.

When I was in the Senate, Democratic Party leaders in the House used the power of committee chairs to call voice votes according to the leadership’s prerogatives. Sometimes nobody said anything or there were just mumbles.

Republicans hated that. I actually carried in the Senate legislation filed in the House by Republicans requiring roll call votes in the manner I just described.

But now that Republicans are in power, what was bad back then must not seem so bad. Now, when a chair does something bad, and I question the leadership about it, they will apologize, say the problem has been addressed, and assure me that it won’t happen again. And it doesn’t until the next time, when the same song and dance continues.

The Biggest Irony of All—Voting Against Your Own Bill!

Rep. Jay Reedy brought a bill, House Bill 1315, that was defeated by a voice vote in the House Property and Planning Subcommittee last week.

After the Chair ruled that the bill had failed, four of the members asked to be recorded as voting in favor of the bill, contrary to the call of the chair. You’ll see that in the screenshot. 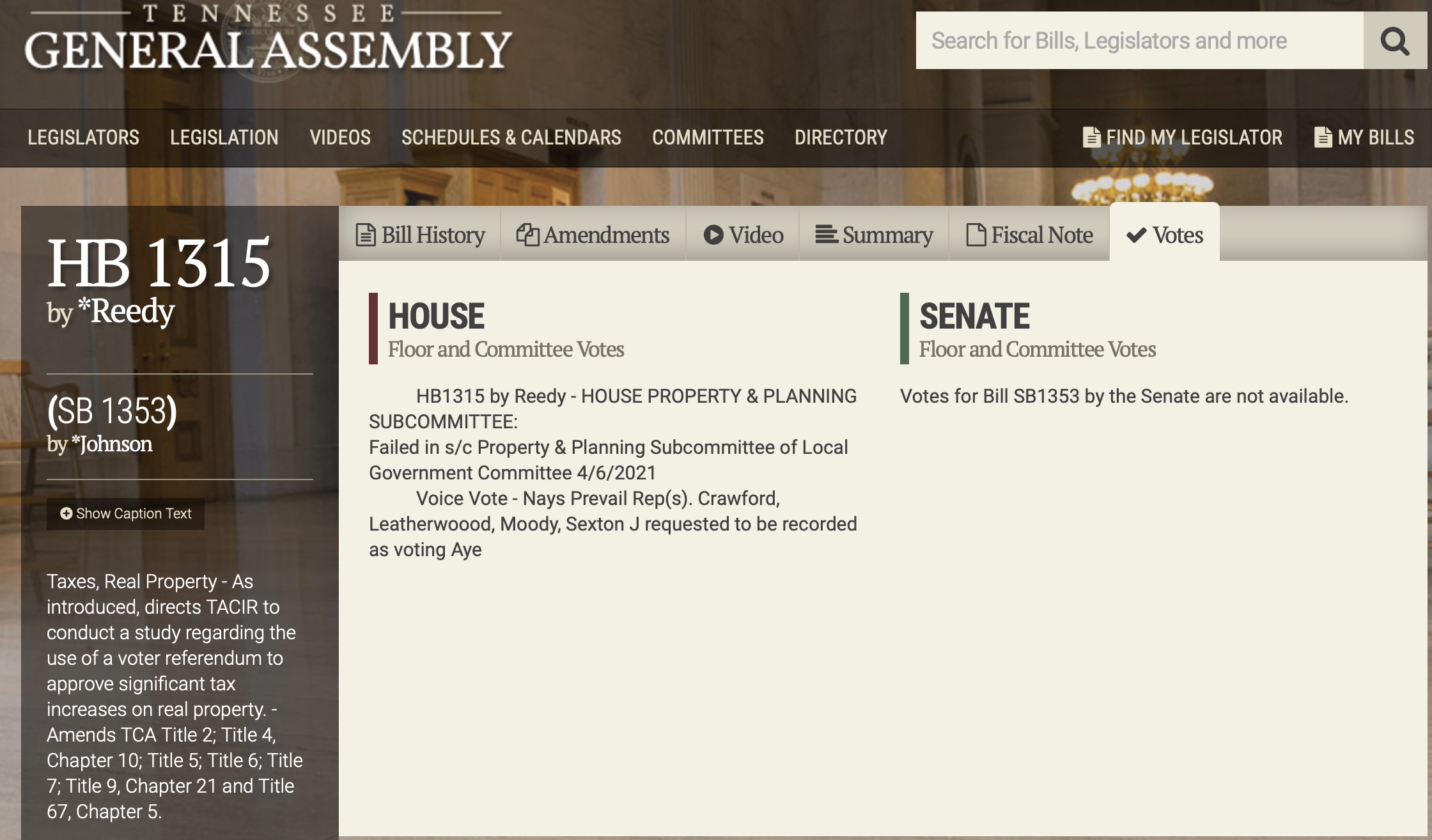 Noticeably absent is Rep. Reedy, who happens to be on the committee. In other words, Rep. Reedy is officially shown as being in agreement with the chair’s ruling, which would indicate that he was against his own bill.

Why Was Rep. Reedy Against His Own Bill?

Eight members of the subcommittee were present for the vote. Rep. Reedy, no doubt thinking about what had just happened to his bill, didn’t think about making sure he was recorded as being in favor of his bill until later. However, by then, had he been recorded as an aye, there would have been a majority of votes forthe bill. Oops.

The official record cannot show a bill failing when it also shows a majority was in favor of it. So, Rep. Reedy could not be allowed to record his vote in favor of his own bill.

I had a friend who once wrote that when impeccable logic leads to an absurd result, the wise person reexamines the premises from which he reasons; one or more of the premises must have been wrong.

The same concept applies here. When a legislator is mad and feels politically “burned” when a person like me relies on the system to report the votes and when the system reports a bill sponsor as having voted against his own bill, then something needs to be reexamined.

If it was bad for Democrats to operate the committee voting process this way, it must be bad for Republicans to operate this way. Then, again, maybe the complaint about the Democrats was just political theater by Republicans for the sake of trying to win the majority during election season.

I’ll keep my eyes on this issue and will let you know if things change or remain the same.

David Fowler served in the Tennessee state Senate for 12 years before joining FACT as President in 2006.