governor-lee rock-and-a-hard-place obergefell-v-hodges certificate-of-marriage marriage-licenses same-sex-marriage
By February 17, Governor Bill Lee will have to make a very hard decision with the potential for national repercussions. He will get sued either way, so he must base his decision on what, in his head and heart, he really believes and let the chips fall where they may. Here are the “bad” choices from which he must choose and the only constitutionally defensible solution available to him.

In the first place, Gov. Lee is already facing one lawsuit, because a group of ministers filed a Petition for a Declaratory Order with the governor’s Department of Health back in December. That petition requires Gov. Lee to decide if he will continue a practice established by former Governor Bill Haslam.

Following the U.S. Supreme Court’s 2015 decision in Obergefell v. Hodges, Gov. Haslam created a same-sex type Certificate of Marriage that, to the ministers, indicates that Tennessee’s marriage licensing statutes now define marriage without regard to a male and female, as required by Tennessee’s Constitution and statutes, and that they think he had no constitutional authority to create.

Before you say, “Oh, same-sex marriage again,” think again. The governor is facing a significant constitutional question with huge implications that go way beyond whether Bob and Fred can get a marriage license from a county clerk.


Why Governor Lee Gets Sued Either Way

Then the governor will have to make the constitutional decision I mention under the next heading. He can avoid that decision only so long.

The ministers’ claim is straightforward. Gov. Haslam did not have any constitutional authority to change the language in Tennessee’s Constitution or its licensing statutes and neither does Gov. Lee.

A governor can choose not to enforce or execute the existing constitutional provisions and statutes regarding marriage licensing if he believes them to be unconstitutional; however, he cannot change what they say in order to do what they prohibit. To do the latter is a huge violation of the separation of powers. This video explains what Haslam did and why it was wrong.

The foregoing means no governor had or has any authority to create a different kind of Certificate of Marriage unless the previous law was amended, and that has never happened.

That also means the ministers are right in objecting to the Certificate of Marriage they are being asked to sign.

Why Same-Sex Couples Will Sue. If Gov. Lee decides Haslam had no constitutional authority to excuse himself from complying with the Tennessee Constitution’s prohibition on licensing marriages without regard to sex (and, as said, Haslam had no such authority!) and decides that Haslam, not being the personal embodiment of the legislature, had no constitutional authority to ignore or effectively amend out of the licensing statute the words “male and female,” then Gov. Lee can’t have that authority either.

However, if he does that, same-sex couples will most likely sue him because they will want the state to “certify” the fact that they are lawfully married.


The Rock and Hard Place SCOTUS Imposed on Governor Lee

Contrary to what others may want you to think, the Obergefell opinion left several constitutional questions unanswered and, in fact, created some new ones.

One of those unanswered questions Gov. Lee must consider is whether Obergefell (A) stands for the proposition that marriage, as now defined in Obergefell, is now a federal right within the provisions of the 14th Amendment’s Due Process Clause or (B) stands only for the proposition that state marriage licensing statutes violate the Equal Protection Clause of the 14th Amendment if licenses are limited to a man and woman.

Whether he thinks Obergefell was a due process case or an equal protection case is critical to how the state treats marriage, and the answer is not altogether clear. But it is a huge federalism issue, even if he tries to “split the baby” by saying Obergefell rests on both the Due Process Clause and the Equal Protection Clause at the same time.

As Gerry Bradley, professor at Notre Dame University for the last 27 years, put it in an opinion letter I gave to multiple lawyers on Gov. Lee’s staff months ago:

Neither in Obergefell itself, nor in any case since, has the Supreme Court clarified whether it meant to create, for the first time in our country’s history, a right within the provisions of the 14th Amendment to marry (and, moreover, without regard to the male-female sex binary). (italicized emphasis in the original; bold emphasis added)

This flowchart “pictures” the situations described in the next two sections. 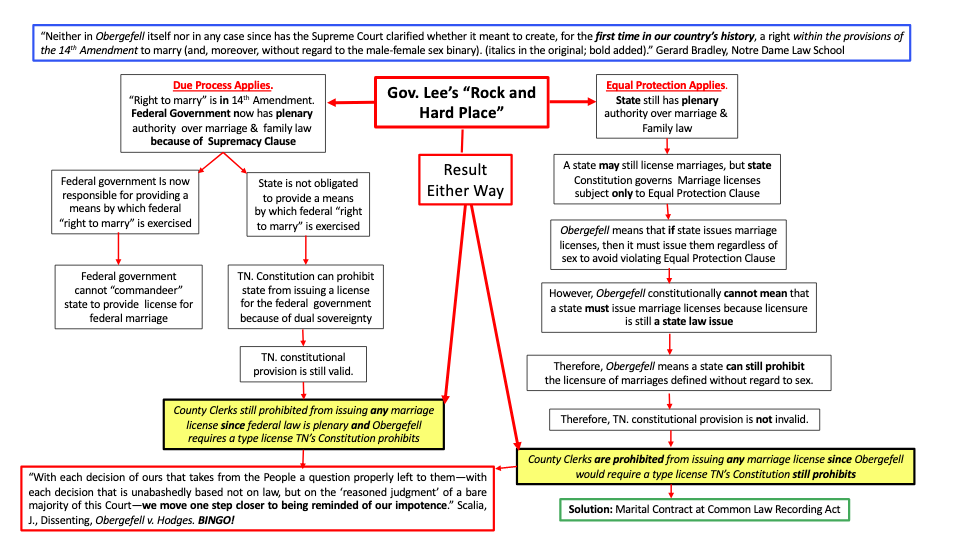 If Obergefell Is About Due Process The Federal Government Has Authority Over Marriage and Family Law, Not Tennessee

That, as professor Bradley said, would be a huge change! And I, along with some constitutional scholars with whom I’m working, think that is, in fact, what they did.

But, if that is true—if Gov. Lee wants to argue that same-sex “marriage” itself is now the “law of the land,”—then he is admitting that the opinion of the Court is not only on par with the U.S. Constitution or a congressionally enacted law, itself a wrong understanding of the limited nature of the judicial power, but that it is federal law.

If Gov. Lee says same-sex “marriage” is now federal law, then, as in other situations involving federal law, Tennessee is under no obligation to carry out federal law.

Moreover, the provision in Tennessee’s Constitution that Gov. Haslam ignored would prohibit the state from carrying out federal law anyway because we can’t even license a marriage between two people of the same sex under state law, let alone do it for the federal government.

If Gov. Lee treats Obergefell as creating a federal right to marriage without regard to biological sex, then he needs to tell the federal government to figure out how same-sex couples get married, because Tennessee’s Constitution prohibits his state from doing it for them even if he personally wanted his state to do so. And, in any event, since he is not in the legislature, he can’t make a law to license a marriage defined without regard to sex.

If Gov. Lee doesn’t say that, well then, he must be assuming the U.S. Supreme Court has the power either to impose new statutes on Tennessee or amend existing ones.

That would be a terrible abdication of state sovereignty by a Republican governor over state statutes and, of all things, to federal courts that have no power to enact laws at all for anybody!


If Obergefell Is About Equal Protection, Then Tennessee Is Constitutionally Prohibited from Issuing ANY Marriage Licenses


If Gov. Lee wants to say Obergefell was really an equal protection case to avoid saying that marriage is now a matter of federal law, then he has a different problem.

Now Gov. Lee is saying marriage is still a matter of state law. That is good, but then he’s conceding that there is nothing in Obergefell, much less the actual language of the U.S. Constitution, that can compel a state to license anything, especially state marriages.

And, if marriage policy is still set by state law, then the Tennessee Constitution still says, “the historical institution and legal contract between one man and one woman, is . . . the public policy of this state,” and “anything other than” that “shall be void and unenforceable in Tennessee.”

Until that provision is repealed, Gov. Lee’s oath requires him to “take care that the laws be faithfully executed” (Tennessee Constitution, Article III, sec. 10), not act like a judge or legislator as Haslam did.

Marital relations between a man and woman came into being long before anyone decided to “license” them. To argue that a license is required for a marital relationship to exist is to say that civil government and positive laws created marriage. Gov. Lee does not believe that.

There is only one solution, as far as I can see, that will allow Gov. Lee to avoid problems of abdicating state sovereignty to federal courts, violating the separation of powers, violating his own beliefs regarding marriage, and having evangelical ministers sue him.

A man and a woman can enter into a marital relationship and then record a document evidencing their “marital contract at common law” at the county courthouse and have it sent on to the Department of Health by county clerks.

Obergefell expressly set aside and did not purport to address marital contracts between a man and woman based on pre-political, non-statutorily enacted common law, the kind of marriage referenced in Tennessee’s Constitution.

This is not just my opinion. Gov. Lee has been given an opinion letter on this point from a professor who is an expert in common law.

Of course, same-sex couples will sue over that, but whether such a law is constitutional is fair game. One thing is sure, though: Whether pre-political, pre-constitutional, common law marital relations between a man and a woman are suddenly unconstitutional is an open question the U.S. Supreme Court has never ruled on.

There is no Solomon split-the-baby type decision (see 1 Kings 3:16–28) Gov. Lee can make. In my view Gov. Lee needs to ask and answer these questions:

David Fowler served in the Tennessee state Senate for 12 years before joining FACT as President in 2006.